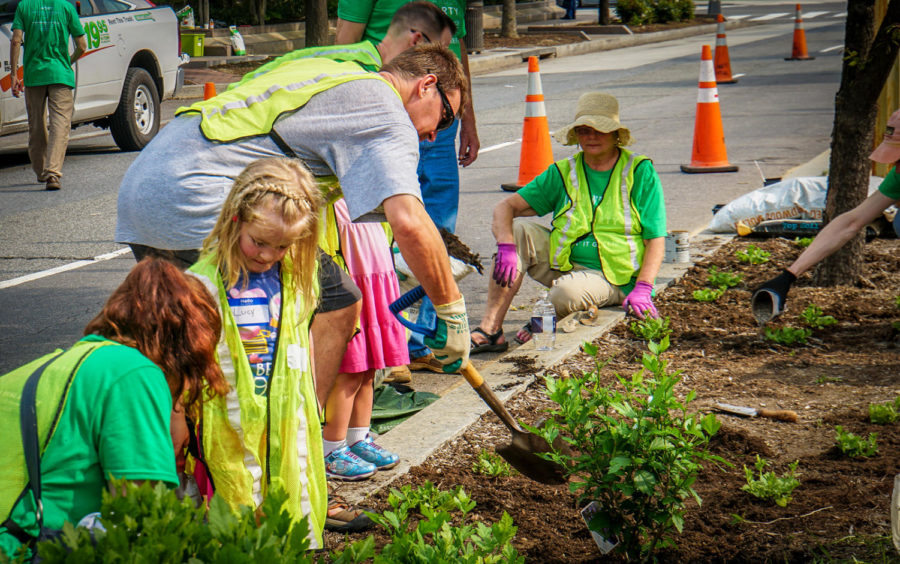 community members work together on a planting project

As the devastating effects of climate change become clearer to environmental scientists, local leaders are starting to consider how the impact of this crisis could reach closer to home. Kris Olsson, Chair of the Washtenaw County Environmental Council, spoke about the local impacts of climate change on communities like Chelsea, and offered some thoughts about how locals can come together to alleviate some of the most damaging effects.

Her general thoughts on the state of climate change are simply “alarmed, but hopeful.”

“We had the Sanford dam that collapsed last year, that was a direct result of more rain storms, and more intense rainstorms,” Olsson said. “We are seeing impacts every year that are disastrous for our farmers and for people who live in urban areas where there’s a lot of impervious surfaces. When we get these intense storms, they flood more often.”

There has been news about the rust belt being less affected by climate change than other areas, but this is not the case. Increased rainfall isn’t a hurricane or wildfire, but still has already contributed to two dams collapsing in Sanford, Michigan last May. If rainfall continues to increase exponentially due to climate change in the coming years, then we need some heavy infrastructure work to combat it.

The Washtenaw County Commissioners Plan is still in the process of being drafted and will help with the impact of local climate change.

The climate plan is currently in the Request for Proposal (RFP) phase. This is when the Washtenaw county commissioners office hires consultants for the planning of climate action, including new green infrastructure on the local level.

“We’re talking about things like reducing impervious surfaces, creating pervious surfaces in parking lots, and planting native rain gardens,” Olsson said. “Having green infrastructure with long rooted plants and wetlands is needed to be able to store that rain in a way that isn’t all gushing down into the stream at once causing creek floods, but also that can hold [rain] to infiltrate down into the groundwater.”

Half of the people living in the county receive their drinking water from the groundwater that is working to be protected.

The impact that rainwater drainage systems have on our lives are astronomical, even if we don’t think about it. Changing the materials parking lots and roads are made out of to allow water to go straight to the ground is going to be difficult but necessary. When pollutants like oil, and gasoline are combined with rainwater like in big impervious concrete parking lots; they eventually runoff into the soil where those pollutants will drain to groundwater, wells, and aquifers.

Half the people in the Huron River watershed get their drinking water from potentially polluted sources. This could impact anyone who lives in the Huron River Watershed including Chelsea, Dexter, Ann Arbor, Pinckney, and Ypsilanti.

It is projected that in Washtenaw County 15 inch rainfall events could be common by the end of the century. The effect it would put on our clean water and infrastructure would be catastrophic.

Rain events have already contributed to the Sanford Dam collapse and the 25,000 gallons of sewage flooding parts of Ann Arbor earlier this July. These events are only a small sample of what could come if things continue the way that they are projected to. To see more of what could happen, we can look to other parts of the world.

“We’ve got pictures of floods from all over the world happening and some of these rainfalls, you think 15 inches a lot,” Olsson said. “I’ve got some [photos] showing 45 inches of rain in two days…it’s even more extreme.”

Humans as a species have simply not experienced consistent rainfall on this scale before. This rainfall affects our freshwater, infrastructure, and the availability of our favorite activities. The world wide affects climate change (including increased rain events) is already extreme, but expected to get worse.

“The bottom line is you can’t give up,” Olsson said. “There’s no other choice.”

We must urge local climate leaders to increase the efforts of combating climate change. The future of our world is in jeopardy. With issues like climate refugees, rainfall, drought, famine, wildfires, and invasive species it can seem hopeless. No matter what, it’s important to know there is always hope.

“One of my favorite movies and books is the Lord of the Rings trilogy…[the protagonists] didn’t give up,” Olsson said. “They didn’t get a choice, and there were just two little, small people, and they kept going…and that’s all we can do.”

Becoming informed is the most important thing you as an individual can do. Reading and articles and reports and studies is important for fixing climate change. The more people who are informed about the real threat of climate change, the more positive changes we can make to our society. The strength of being informed comes in numbers, and one day when the will for change comes from the people, it’ll start a cascade effect across the world for change.