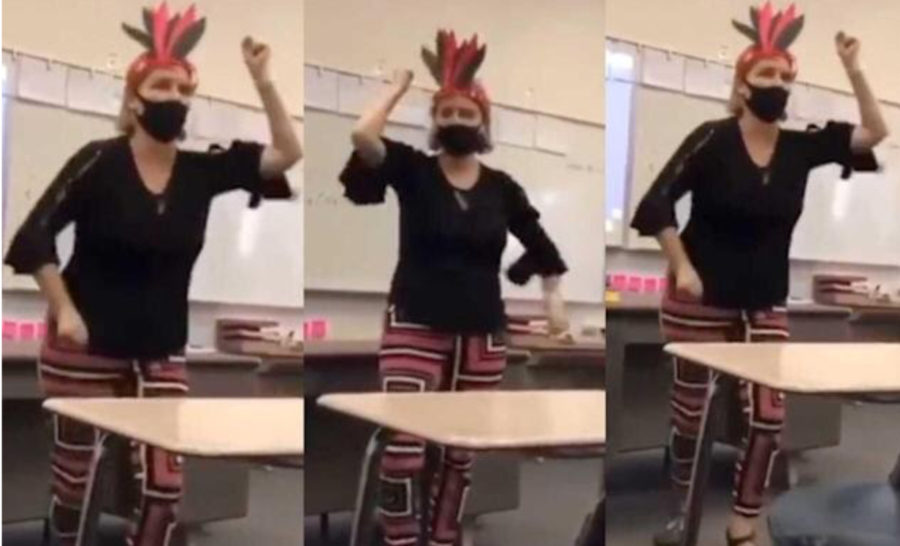 Recently, a video of a math teacher in California went viral and led to that teacher’s suspension. She was teaching a lesson about SohCahToa (a mnemonic device used to remember the three principles of trigonometry) to her class. No big deal, right? Unfortunately, the teacher wore a Native American headdress made out of paper and performed “the tomahawk chopping and war whooping” attributed to Native American culture.

So, what went wrong? Why is this such a big deal?

Simply put, these actions are the result of ignorance. The teacher may have had good intentions and was just trying to keep her students engaged in the lesson, but that does not excuse the extremely negative impacts of her actions.

The video, recorded by a Native American student who later said that he “felt that violence was being committed against him,” was first brought to mainstream attention through a viral Instagram post.

In one of the many responses to the video, Jacqueline Keeler, the founder of EONM (Eradicating Offensive Native Mascotry), said that “wearing a headdress reinforces stereotypes about Native people and appropriates our culture with little or no regard for our traditions. I think it is egregious and contributes to the dehumanization of our people.”

This issue reminded me of an incident in my educational history. Back in elementary school, my class created costumes and dressed up as “Indians and Pilgrims” for a school play. Looking back, I am appalled by that. Our teachers and administrators  should have known better. Sadly, we didn’t, so we must do better now.

Recently, many schools and even professional sports teams’ have been called out for portraying harmful stereotypes of Indigenous Americans through their sports teams mascots and names.

The backlash has led many groups to change their team names and mascots, one of the most prominent being the Washington Football Team, previously known as the Washington Redskins. Unsurprisingly, this decision came with much controversy. However, many people were very excited about the change, grateful that progress was happening towards moving away from harmful cultural stereotypes.

Central Michigan University’s teams have been nicknamed the Chippewas, or the Chips for short, after the Saginaw Chippewa Indian Tribe. When CMU started using the nickname in 1942 it quickly led to “stereotypical imagery and mockery of native ceremonies.”

However, in 2002, the Chief of the Chippewa Tribe, Maynard Kahgegab Jr., and the president of CMU, Michael Rao, signed a proclamation promising that they would work to strengthen their relationship and work to use the Chippewa name in a “respectful and honorable manner” instead of the past appropriation.

Within sixteen years of the proclamation, students could feel a significant difference. While attending Central Michigan University Meteorologist and CMU graduate (class of 2018), Haleigh Vaughn “felt that the campus, university, and community incorporated the Chippewa Indian Tribe well.”

She continued to express that many classrooms and buildings are named after tribe members.

“There were classes offered discussing their culture and exhibits all over campus speaking about their history,” She said, reminiscing about a trip to the nearby Ziibiwing Center of Anishinabe Culture & Lifeways. “It was a requirement of one of my classes to attend, and I learned so much.”

Vaughn’s Chippewa pride still runs deep in her today. “It makes me proud to be a Central Michigan Chippewa. Our chant ‘Fire up’ at CMU was always an empowering phrase, and I believe that the members of the tribe felt that as well,” Vaughn said.

There is a significant difference between the Washington Football Team and the CMU Chips representation. When called the Washington Redskins, fans of the football team would don red face paint and apparel that portrayed harmful caricatures of Indigenous people. While attending CMU football games, fans are immersed in Chippewa culture to uplift the tribe and show appreciation for their unique culture.

There are so many ways that we can incorporate Native culture into our own. The key is being diligent about respect. A common phrase in this discussion is “appreciation versus appropriation.” We must work to appreciate and uplift other cultures, but at the same time, we must ensure that we are doing so respectfully and not using another’s cultural heritage for our own gain. Remember not to speak over other people, but rather to find ways to lift up their voices.