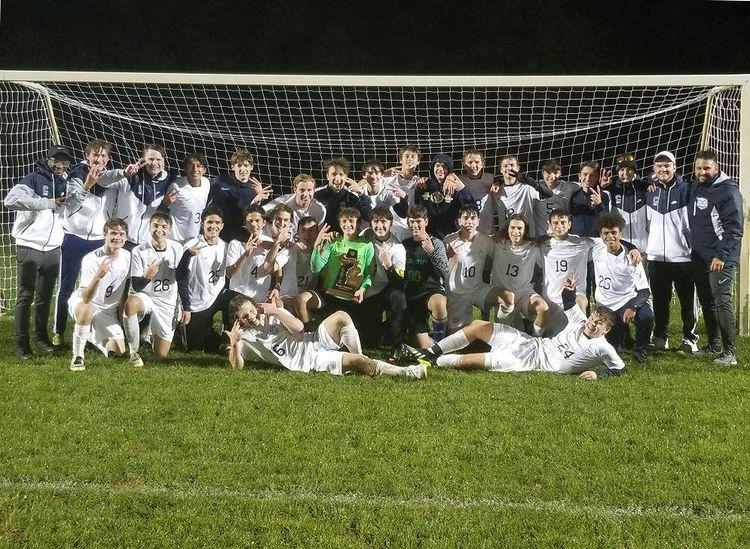 The Chelsea High School’s boys’ soccer team has won the Division 2 district title for the second year in a row, after winning it in 2020.

This year, the Bulldogs took on the South Lyon East Cougars last Thursday evening and took home yet another win, but the game was a close with Chelsea falling behind early in the first half when South Lyon East took a 1-0 lead.

Although Chelsea went into the second half down, they improved their performance when Jose Ortiz Martinez (‘24) tied up the game 1-1 with a beautiful goal. The game then went into its first overtime period of ten minutes in which the Cougars were able to put one in the back of the net. The Bulldogs responded with a series of connections that led Kellen Ahlstrom (‘23) to score a goal tying the game 2-2.

The Bulldogs were not able to get another goal in the double overtime, so the team was sent into its second shootout of the week after beating Adrian in penalty kicks 4-2 in the district semi-finals.

After four rounds of penalty kicks, Keegan McLaughlin (‘22), Charles Budd (‘22), and Barret Kruger (‘23) had scored to give the Bulldogs a 3-2 lead. Senior player Colin Hay (‘22) scored in the fifth round to seal the 4-2 win for the Bulldogs. Keeper Shane McLaughlin (‘24) also had an outstanding game by stopping two goals from South Lyon East.

“Keeping the ball out of the net was the only thing going through my mind during the shootout,” McLaughlin said.

Senior member of the soccer team Parker Olk commented on how the second-year head coach Mario Zuniga Gil and his deliberate style of coaching helped the team get the win.

“Mario coached us well,” Olk said. “He has a more technical style of coaching than some of my previous coaches.”

If the Bulldogs come out with the same intensity that they have had this whole season, Chelsea should expect to take home another win when they take on Fenton in the D2 regional semifinals this Wednesday at 7:00 PM in Mason. Tickets can be purchased using the GoFan app/website.