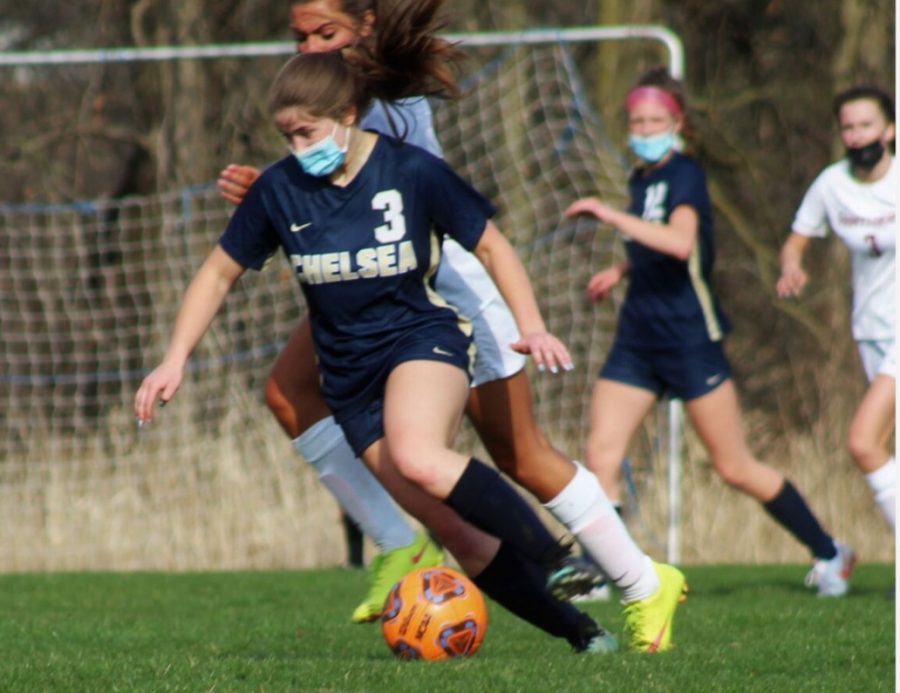 Chelsea Girls soccer is 2-0 after their opening week while multiple upperclassmen varsity players were in quarantine.

With five upperclassmen in quarantine and a game the next day, underclassmen had to step up and play for the team.

The Bulldogs won their opening game 3-0 against Parma Western.

The first goal of the game was scored at the 23 minute mark by freshman Carley Grabarczyk to give the bulldogs a 1-0 lead.

Minutes later Erin Dusenbury (‘22) drilled one into the upper corner from just outside the 18 to give the bulldogs a 2-0 lead at the half.

About 10 minutes in the 2nd half Parma Western was called for a handball in the box. Dusenbury took the Penalty Kick and scored to give the Bulldogs a 3-0 lead.

The Bulldogs beat Pioneer 2-0 in their second game of the week.

The game was scoreless until the second half when freshman Ava Hoffman found the back of the net twice to give the bulldogs a 2-0 win.

“I’m very proud of how the freshman played,” Hoffman said. “We were not expected to win either of our first two games and we did. Everyone worked together really nicely and we outplayed both opponents.”

With the usual varsity goalie being in quarantine Arianna Griecci (‘23) was left to play her first varsity game as goalie. Griecci put up a good show by earning 2 shutouts for the bulldogs.

While the underclassmen proved themselves their opening week, the team should be even stronger when the upperclassmen are out of quarantine. The team looks forward to being together in full.

The Bulldogs play their next game this Thursday against Marshall.