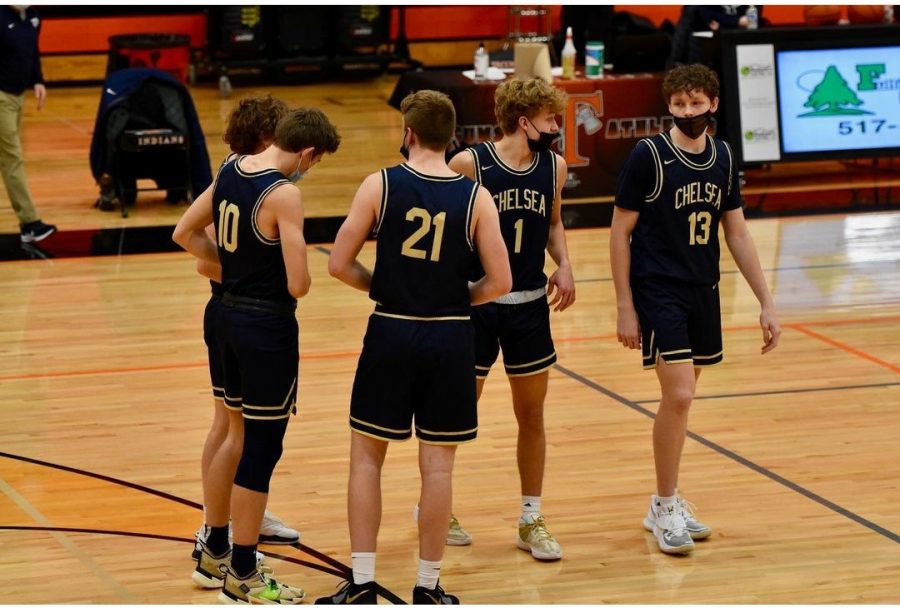 The men’s varsity basketball team beat Adrian 59-55 in a close game yesterday and is currently 6-2.

The Bulldogs led Adrian 35-29 at halftime and held on to the lead throughout the rest of the 2nd half to win by 4 points.

“I feel our team played very good on offense, as we got a lot of open looks,” Jayden Woody (‘22) said. “We had trouble stopping the ball on defense, though, and that made it a close game.”

The team’s record is 6-2 overall and 5-1 in the SEC White Division. Last weekend, the Bulldogs played Arbor Prep but lost 55-49.

At half time the score was 30-17. Junior Jack Cavanaugh explained that though the Bulldogs had a rocky start, they finished the second half strong.

“We struggled a bit in the first half offensively, but we turned it on in the second half,” Cavanaugh said.

Jack believes that if the team works more on staying in front of people on defense, they will play a lot better. He said one thing that made this game especially tough was the size difference between the players.

“One disadvantage we had during this game was our size,” Jack said. “They were a lot bigger than us, and it was hard to contest shots and get rebounds.”

Despite the tough competition, freshman Joey Cabana led the bulldogs in scoring with 27 points.

The Bulldogs play Pinckney tomorrow night at home. The Pirates are currently 7-0 coming off a win against Dexter.

“I can’t wait to play Pinckney because it’s going to be a tough and very competitive game,” Woody said. “If we win we’ll be in the number 1 spot in the league, and we’re going for the league title.”

Fans can watch the game with a subscription to the NFHS network.

The state tournament starts towards the end of the month. Woody explained that he is looking forward to the playoffs and continuing to improve and play well as a team in their next games to prepare.

“We have a team this year that can do something really special, and I’m glad to be a part of that.”