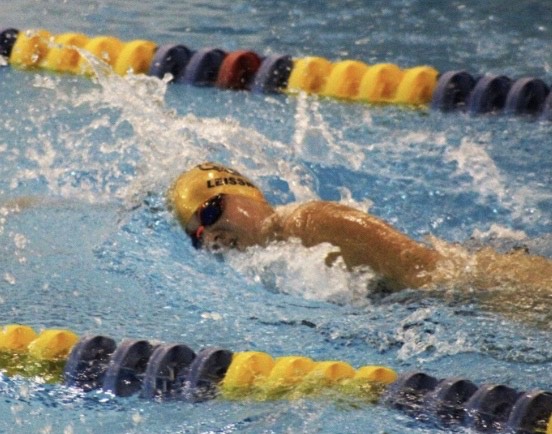 Katie Leissner (‘21) just completed her final season on the women’s swim and dive team. She began her competitive swimming career at age 6 for Chelsea Aquatic Club.

“When I was in 7th grade, I began middle school swimming,” Leissner said. “It was there I swam the 200 freestyle for the first time and lapped everyone in my heat. That experience is what started my distance freestyle career.”

She became very successful in distance freestyle, as she went to states her sophomore and senior year.

“My sophomore year at States, I waited to put on my speed suit until about 20 minutes before my 500,” she said. “As I was putting it on, my suit tore, and I freaked out. My teammate ran to get her extra speed suit, and we quickly put it on. I ran out of the locker room and immediately went behind the blocks to swim. Even after all that, I still managed to drop 2 seconds.”

Her favorite part about being on the swim team is the relationships she was able to form with the girls on the team.

“I gained a whole different family that I got to see multiple times a day,” Leissner said. “It’s comforting to know that everyone else on the team is going through the same thing and is swimming the same amount of yards as you.”

After high school, Katie doesn’t plan to be a part of college swimming, but she is looking into a swimming club instead. Her final high school swim meet was on January 16th at states.

“When the race ended, I smiled at my teammates and yelled ‘I’m retired!’ They all laughed, and we hugged behind the block.”