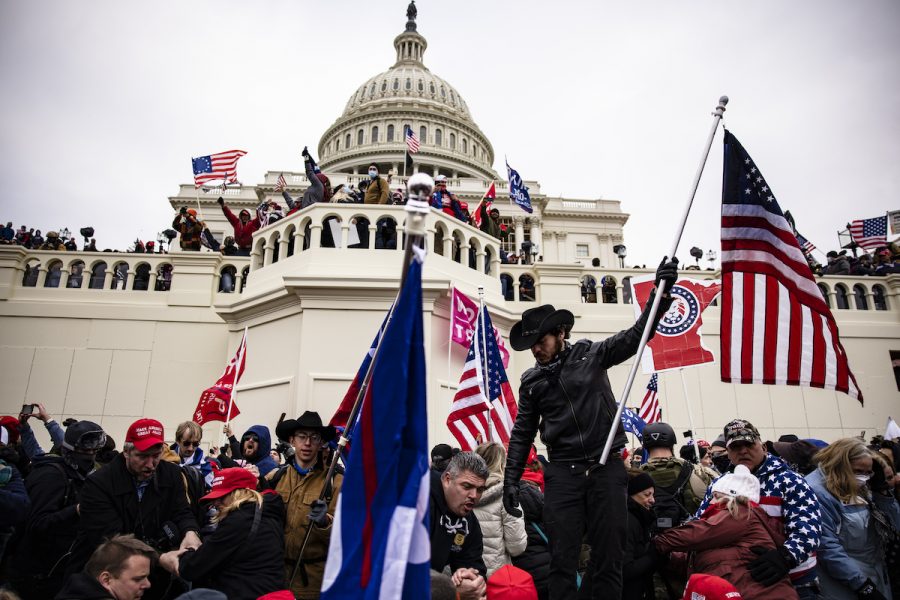 It is 4:04 p.m. on January 6th, 2021. I pick up my phone and call my mom in a panic, berating myself for not going with her to the store. We’re far from D.C., but we’re never far enough from this kind of violence. I think to myself, Years from now, will people ask where I was when I heard? Is this my 9/11?

But that’s exactly what President Trump did on the 6th, in a video that has since been taken down for violating Twitter’s rules. But more than that, Trump directly encouraged this mob just before the siege of the Capitol.

In this video of the rally captured by Bloomberg, Trump states to a crowd of his supporters, a crowd of people that included those who would later push their way past Capitol police, “We will never give up, we will never concede. It doesn’t happen. You don’t concede when there’s theft.”

At the time, the Electoral votes were being counted by Congress to certify the 2020 election. Those who stormed the Capitol were attempting to stop the voting process, despite multiple courts sanctifying that this election was not fraudulent. It has been proven time and time again that President-elect Joe Biden won this election by a fair vote, and Trump feels he can stand in front of hundreds of people and lie to stroke his own ego and incite violence during a crucial part of the democratic process.

This is suppression of the people. This is attempted silencing of the popular vote. This is violence against elected officials. And this has been condoned by the sitting President.

We are no longer able to stop this at the root; it has grown into a nearly ripe fascist fruit.

Naomi Wolf, an activist, journalist and former political advisor to Bill Clinton, outlined the 10 steps that lead to fascism in her book The End of America: A Letter of Warning to a Young Patriot. And now we’ve reached a critical opportunity to stop the tenth step: suspension of the rule of law.

There must be consequences. A sitting President has condoned violence against the democratic system. Hundreds of people have stormed the Capitol, gleefully taking photos of themselves with the police officers meant to be arresting them. They are not ashamed, and even worse they are not afraid. The United States is facing its most violent transition of power in its entire history, and those responsible are realizing there are no consequences for their actions. Every single individual who climbed the walls of that building, who drove our lawmakers and journalists into hiding, who ransacked a government building and were able to get ahold of an untold number of documents, must be tried for the violence they’ve caused and the sedition they’ve committed. And Donald Trump himself must face consequences far more severe than a few social media sites shutting him down.

As Joe Biden said in his address to the American people during the attack: “At their best, the words of a President can inspire. At their worst, they can incite.”