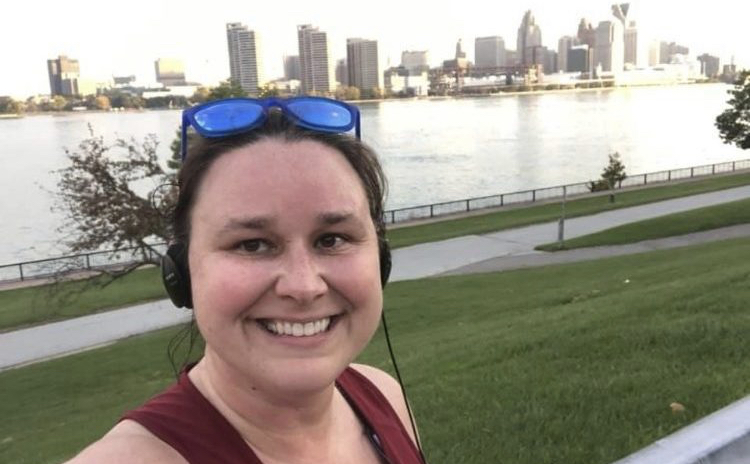 The Bleu Print is proud to present Blue & Bold, which features a Chelsea School District employee each week with a unique story to tell. If you have an idea of a CSD employee who would make a great feature, email us at [email protected]

Seventh grade special education teacher Ms. Tiffany Manning has run at least one mile every day for the past 864 days.

Manning has been teaching for 16 years, this year being her 4th year at Chelsea, and running since she was in sixth grade. Her middle school gym teacher challenged her to join the cross country team, and ever since then running has been a big part of her life.

She started her streak during May of 2018 after reading about one in the Runner’s World magazine. The magazine annually challenges runners to run every one of the 32-35 days between Memorial Day until 4th of July. Manning has long since overcome and built on that challenge and connected with others who have done the same.

“I originally started with just that [between holiday streak], and then there’s a Facebook run streak group that I joined,” she said. “People on that Facebook group are so positive and motivating and fun. By now I’ve found people that started the same day as me and we’re all Facebook friends. We chat and we’ve even done book clubs together and stuff like that. It’s a really neat little community that is fun to be a part of.”

Though the minimum daily distance she must run to keep her streak afloat is a mile, she has run a few half marathons and one full marathon during that time. During quarantine, she ran 10k (6.2 miles) every day for a full month and 15k (9.3 miles) 21 days in a row during a different month.

Manning competed in both middle and high school cross country, signed up and ran 5ks for fun in college, and has recently been running in longer races. When asked about her favorite race, she responded with the 2019 Detroit Free Press Marathon, where participants run across the bridge to Canada and back. 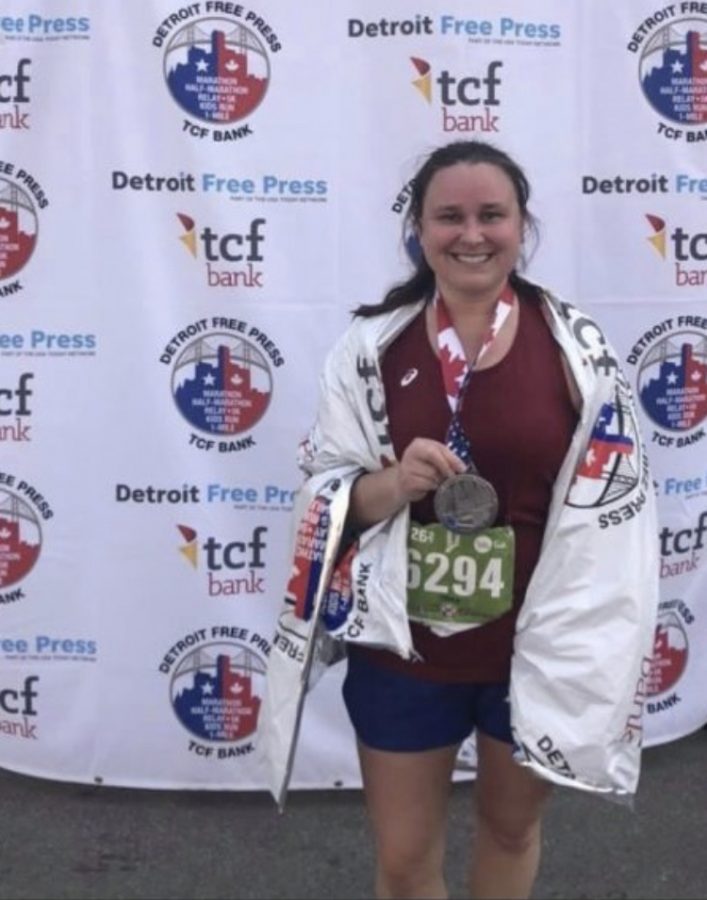 “The marathon is the race where I felt the most accomplished afterward,” she said. “I felt really good at the end and pretty awesome finishing. It was a good race for me. It wasn’t very fast or anything like that. However, I think it was my favorite just because it’s a marathon, and now I can say, I ran a marathon.”

Manning explained that she usually runs alone, but she trained some with band teacher Ms. Katy Steklac who ran the same marathon last fall.

“Steklac and I would run together sometimes, but she’s way faster than I am so we started doing our long runs separately and then met up for breakfast on Sundays,” Manning explained. “It was something fun to look forward to and some social time after those longer milage days.”

Manning explained that she has kept up the streak for so long not only because she enjoys running, but also because it gets her out of the house and moving and it’s something she can share with her son. She has three kids and has inspired her oldest one to start a running streak of his own.

“I have a fifth grader who is also doing a streak,” she explained. “He started the streak the same day that I did in 2018 and went for 80 days during the summer. He took the fall off because he had soccer, but on January first of 2019, he started it again and currently has a streak of over 630 days.”

She said that getting outside to move has become a part of her entire family’s routine.

“My son and I started out running together,” she explained. “He’s improved very quickly and gotten faster than I am, so he just wants to run his own. I usually run on my own later in the evening when it is dark and peaceful on my street, so my husband and I go for a walk while he runs sometimes, and my other two kids will ride a bike. We do the same mile just in different ways.”

Running is not always easy on the body or mind, but when asked if she ever thought about taking a day off or quitting her streak, Manning responded with never for more than a minute or two. Even when she struggled with knee pain, leg pain, and shin splints leading up to and during one of her half marathons, she held her head high and finished with a smile.

“A year ago in May, Steklac and Mara Goodman, the school social worker at Beach, and I all ran a half marathon in Indianapolis together,” she explained. “I was a little injured training for that with knee pain, leg pain, and shin splints hitting at the same time, so that was not my best race. It rained, though, and it was kind of fun to run the half marathon in the rain. With the little injuries like that, usually a massage and some ice works to help feel better. Sometimes I slow my miles down when I am trying to recover from certain aches and pains, but I’ve faced nothing so far that I’ve had to stop the streak.”

She explained that through all her years of running, the biggest thing she has learned is mental strength.

“Running is really all mental,” she said. “Even when I’m physically super tired and I really can’t do it, if I just mentally convince myself that I will survive this, that I’m going to overcome this, that it’s just a mile, or just one step at a time, then I’ll make it.”

She said that in previous years she has incorporated what she has learned through running into her teaching, but this year with less class time due to COVID-19 she hasn’t been able to talk to her students much about her passion.

Between teaching, running, and 3 kids, Manning is a busy person. She explained that though support from her husband and family definitely helps her continue her running streak, her main motivation comes from within.

“I am able to balance running with the other things in my life mainly just because I make it something that I want to do and make it a priority to be able to get out and get some alone time,” she said. “I think it makes me a better teacher, a better parent, a better wife, and a better everything else to be able to have that [time set aside to run everyday], even if it’s just a couple minutes to myself, to get out there and do some exercise and feel good.”

For Manning, “feeling good” doesn’t require a medal or trophy; it’s all about the hard work.

“I like the feeling of accomplishment that comes with running and breaking a sweat.”