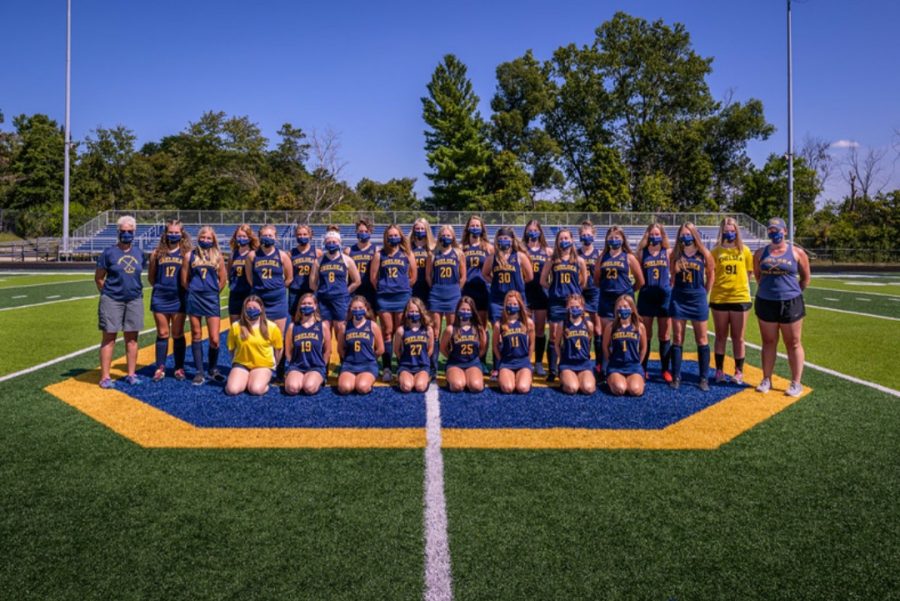 The field hockey team started their season strong despite COVID-19 related delays and challenges by defeating the Pirates 8-0 on Wednesday in their first game of the season.

The two weeks before their season opener, the entire team was on quarantine because one player tested COVID-19 positive. At this point, they weren’t sure if they would play any games at all or if their season would be moved to the spring like football was. The Bulldogs faced a lot of challenges and uncertainty leading up to their first game, but they were still able to keep their heads up and get the ball rolling smoothly.

“We’re flexible,” head coach Leslie Fry said. “The game was very exciting because we’ve been practicing since mid-June doing strength and conditioning and some stick work, and we never knew if we were going to be able to play or not. Our season was scheduled to start the 25th of August, and we didn’t find out until September 3rd that we were allowed to play. We get that opportunity now, and we are excited about that.”

The Bulldogs began the game with a 4-0 lead in the first quarter, and they continued to run up the score and keep the Pirates from scoring the rest of the game.

“My favorite part of the game was definitely the first quarter,” third year varsity player Makayla Kegerreis(22) explained. “Starting off the way we did was very exciting and a huge confidence boost that we could bring into the rest of the game.”

This year the Bulldogs are bringing back a solid full varsity squad. They ended the season last year taking second in the state tournament and not graduating any seniors from the team. Coach Fry said that “it is great to have them all back and be able to show their stuff again.”

“We were really close to winning states last year, so we know we can make it that far and have to play like that,” Makayla added.  “We’ve never won by as much as we did Wednesday before. Usually it takes some time to get used to playing again. It was nice to come out where we were last year on Wednesday, especially because we hadn’t been playing for two weeks beforehand.”

Coach Fry explained that their experience as players and as a team plus their dedication in the preseason lead them to victory on Wednesday. When asked who played the best this game, she quickly gave the name of team captain Grace Lane(21). Grace scored 4 of the team’s 8 points, 2 of those goals without any assists.

Coach Fry has been coaching the team for 16 years, and Makayla has been playing field hockey for 9 years. When asked what this biggest difference between this game and their other season openers was, both responded with wearing masks. Every player and coach was required to wear a mask at all times before, during, and after the game. Coach Fry expounded that this was especially challenging for midfielders, who typically run 3 or 4 miles of wind sprints in the 60 minutes of game play, and the goalie and corner players whose positions by nature require layers of protective headgear.

Makayla, who typically plays midfield, explained what it was like to wear her mask during the game

“When we were playing the game I didn’t really notice it, but when I was on the sidelines after I had run a bunch and got the mask all sweaty and gross it was definitely noticeable. It’s also harder to see with it on looking down at the ball and the field.”

Another big thing that is different about this season is having enough players to have both a varsity and a junior varsity team. The last time this happened was 5 years ago.

“Having a JV team this year is exciting,” Coach Fry said. “It’s great because we’re able to do full scrimmages against ourselves [in practices]. In the past, since we’ve had such a small squad, we’d have to work out a lot of game dynamic situations during game day, but now we have a full varsity and JV, we can work it out at home in practice, which is nice.”

On Saturday the girls made up the first of the games they missed while the season was in limbo. They put up a fight, but ended up losing to East Grand Rapids 1-0. There are still lots of games left in the season, though, and they play both St. Catherine and Dexter at home this week. Only 2 spectators are allowed per player, but if you know someone on the team, it might be worth asking if you can get your name on their list.