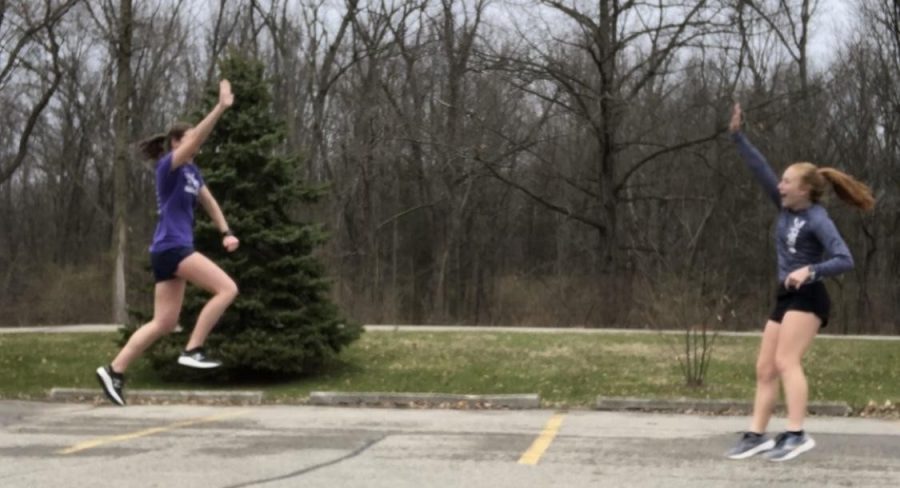 Despite the cancelation of all spring sports in the state of Michigan, many distance track runners are staying active by training to run farther than they ever have while practicing social distancing.

Running is one of the few sports you can participate in alone and from anywhere. No gym, pool, or field is necessary. In a time where running is one of few reasons you can leave your house “to engage in outdoor activity… while remaining at least six feet from people outside the individuals household(section 7-1 an executive order 2020-42),” athletes of all grades and skill levels have challenged themselves to continue to train and run their personal longest distance this May.

Many CHS runners had trained all winter to reach their track season goals, so when the races were canceled, they needed something new to help keep them engaged. Coach Eric Swager had an idea that would keep the runners motivated to stay fit while staying socially distant: go long! Riley Thorburn(‘21), who is training to run her first full marathon, explained that making the best of what you can do is really important in times like these.

“At first I was really sad about being canceled because I worked hard all winter to come back from the injury I had in cross country and feel really motivated to race again since I had such a long break,” she said. “But then my focus shifted. I thought ‘I can’t do anything to change the situation, so I am going to try and make the best of it and do something I would never be able to do if the track season wasn’t canceled.’ When will I ever have the opportunity to train for a marathon again in high school? I have an infinite amount of time, a season that is very far away at this point, and I am finally getting back into endurance shape: this is the perfect time to do it.”

Because the distance many Chelsea runners are shooting for is much longer than the two-mile, one mile, half-mile, and quarter-mile races they would usually run during track season, these runners have to increase their mileage and make shifts in their training. With coach Swager available to give guidance to runners online if wanted, many runners have planned out how to reach their new long-distance goals in ways that will help prevent injuries.

Senior Emily Chizek, whose longest run so far is 13 miles, explained that the training most of the runners have been doing is both similar and different than what they would have done during track season.

“Our training has the same general outline with a tempo like P-loop on Mondays and a turnover work out like we would have in track,” she said. “However, we’ve started to implement a longer run as another workout in place of our shorter time trial Luick mile every week. The non-workout days focus heavily on recovery following the long run and a slightly faster CT pace following the tempo. The easy “recovery” days are pretty comparable to the ones we’d run during track.”

Jimmy Alford IV(‘20), who is currently training to run a full marathon, says that his favorite part of his training is that he can do what he wants to do and control what, when, and where he runs. CHS runners Riley and Emily agreed.

“It’s weird that we get to choose when we want to run,” Riley commented. “If we were in track season, we would have practice in the same places times every week. It is not at all like that now. It is nice to pick where we do workouts. I still do a tempo run every week, but it doesn’t have to be on Ploop, a 4.9-mile loop we would do a tempo run on every week if track wasn’t canceled. Now we can run in Dexter and on roads by our houses. In short, we can mix it up.”

Although runners can still go outside and run solo or with one other person staying six or more feet apart, all would agree that their training would be better with the “camaraderie and company” of their entire team.

“My least favorite part of my current training is that I have to do it alone,” Alford said. “Running is much more enjoyable with other people and usually helpful when trying to achieve a time goal.”

However, reaching new goals isn’t the only thing that keeps these runners going. Riley explained her motivation comes from within and that she has appreciated being able to run more than ever in this time, letting it serve as her comeback as well as her way to get out of the house for a bit during the quarantine.

“The reason I’m so motivated to run all of these miles is that there was a time when I couldn’t,” Riley explained. “I had an injury over the winter where I was so limited and could only run like one mile. So running 26 will be my comeback, and it gives me confidence going into cross country season next fall that I have a base of miles. Running has become my favorite part of the day because it’s my one chance to go outside and get away from the house. The longer I run, the longer I’m away from the house.”

Emily is a senior who would have been a captain of the track team this year. She may not get to run another race wearing a Chelsea uniform or create the memories most seniors do in their last seasons, but she does get to take away all of the good times and friendships she has created in the last four years of being a Chelsea runner. She lets her teammates inspire her still, even though she has no official season to train for. She hopes that she will be able to safely run with at least a few of her teammates when it comes time to put her training to the long-distance test in the middle of May.

“It’s motivating for me to remember that I was supposed to be a captain and a leader for track,” she said. “I feel that in a way, training and working hard for a goal is me leading my team– even though we have lost our season. Over the last 4 years, I’ve run for the team, and honestly, it has been because of the girls I run with. This is my last hoorah with them before leaving for college. The hope that some of us can run [our longest distances] together in May is a huge motivating factor after not being able to see everyone in quite a while.”

There is a lot going on in the world right now, so many runners understand the need for their season to be canceled. They may not be able to run with all of their teammates, but that doesn’t mean they can’t get out and run alone or with another person six feet apart. They may not have a track season, but they can still motivate each other and stay connected by calling each other on the phone during runs or using the Strava app that allows them to post their runs and comment on their teammates’ runs. We are living through history right now, and these runners are making their quarantine stories unforgettable.

“My training now is not as fun because there are not as many people, but I’m sure I’ll remember the marathon for the rest of my life,” Riley said.