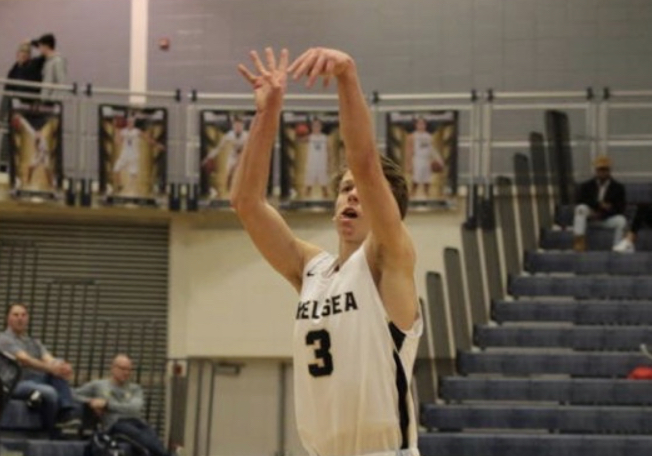 Basketball is one of the most popular sports for Chelsea bulldogs, even from a young age. 17-year-old Owen Brown (‘20) is a guard for the men’s varsity basketball team, and had loved basketball since he was a kid.

“I have played basketball ever since I was little, really as long as I can remember,” Brown said.

He loves the passion the sport brings into his life, and he’s met some of his greatest friends through it.

“My best friends are my teammates because we spend so much time together,” Brown said. “We get to know each other really well and then we end up hanging out outside of practice and games too.”

Coaches get to know their players very well during seasons, and high praise comes from Brown’s coach, Adam Taylor.

“Owen Brown is unselfish, and he cares about others,” Taylor said. “He is a mature young man who acts the right way for his age.”

The Chelsea community rallies around sports and fills the stands at basketball games. Thriving off the pressure to do well, Brown thinks it’s fun being a basketball player in Chelsea, and he devotes much of his time to the sport.

“Sports take up a lot of time so I don’t have time to do much else,” Brown said.

The time he does have outside of basketball involves a lot of friends and a lot of homework. Him and his teammates spend their time together. In order to be successful, the team needs to work together to encourage one another, and they need to have faith in each other’s abilities.

“I know that my teammates always have my back,” Brown said. “We trust each other and that makes us a good team.”

In a recent game against Lincoln, the team went into double overtime and scored 102 points against the highly ranked team. Brown said he’s proud of his team, and he’ll remember the game for a long time after he graduates and goes to college.

Even though he is not exactly sure what he wants to do for a career, Brown is interested in majoring in business. Whatever he does, though, it’s clear he’s made his mark at CHS.