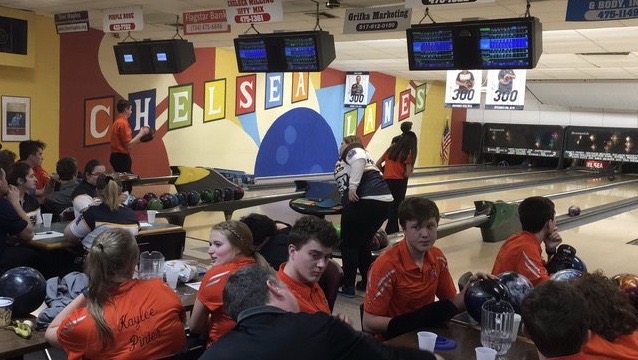 Chelsea High School’s own boys varsity bowling team has had a great season this winter. They are currently 6-1 having competed against strong teams like Bedford, Saline, and Lincoln.

They have been led this season by Senior Captain Jaylen Watson and Junior Captain Luis Carvallo. The key to their success has been that,”Spares win championships,” Watson said. Holding true the fact that they aren’t perfect, but the important part is picking up the extra pins has helped them excel.

A major difference in this year’s team is their talent. With 3 seniors and all of their juniors returning, it’s no surprise they are currently ranked 6th in the state in division 2 and primed for a regional championship run. The hard work has paid off. Currently, 7 of their 10 players are ranked in the top 30 in the SEC with outstanding average scores of above 185.

In practice they have trained hard and used their resources to their advantage. “Coach Eddie Greenleaf’s incorporation of new technology has helped a lot,” Carvallo said. The team uses varying devices to track their footsteps and the balls movements to fix their game.

The team’s success this season so far is not expected to stop anytime soon. Come out to support the bulldogs at Chelsea Lanes as they take on Pinckney, Jackson, and Tecumseh in the next few weeks!