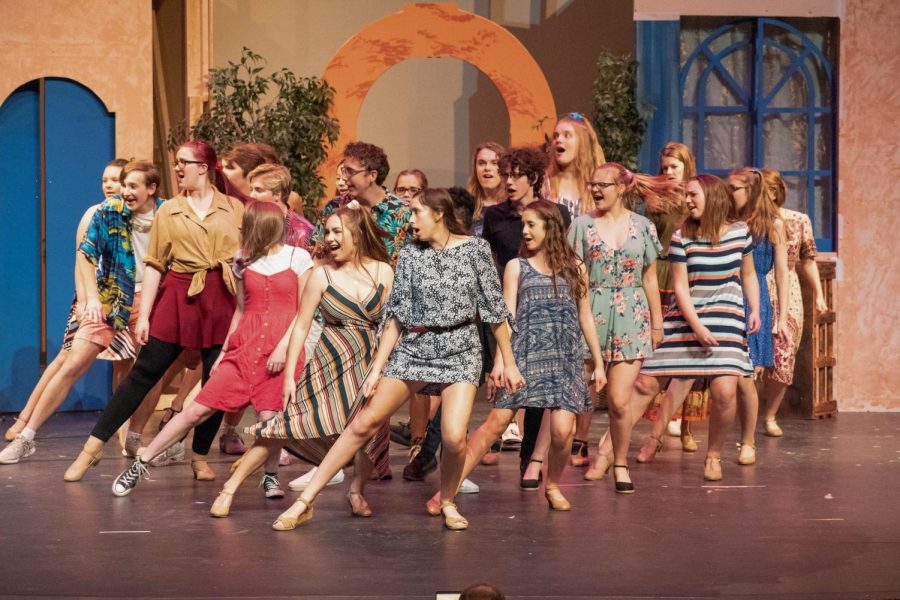 Last Friday and Saturday, CHS Theatre Guild put on their production of Mamma Mia! The vibrant costumes and lively musical numbers captured the essence of the original 2008 movie and the music of Swedish pop group ABBA. From the acting to set and production, the show as a whole was nothing short of impressive.

For those who may not be familiar with the movie or play, it follows a story between a mother and daughter living on the Greek Islands. While the daughter prepares to get married, she invites three men, all of which may be her father. She does the inviting secretly in hopes of figuring out who her father really is and have him escort her down the aisle on her big day.

The musical followed a similar plot to the movie, including the same characters and many related scenes throughout. There were some noticeable differences, however, in song choice and the use of these songs. For instance, the song “Knowing Me, Knowing You,” performed by Charles Korner (‘21), helped develop his character as Sam. While these differences stood out to connoisseurs of the movie, they were thoughtfully included in the play and evolved important parts of the plot. The CHS production wasn’t identical to the movie but was equally as enjoyable.

One key aspect that stood out during the play was the combination of acting, dancing, and singing. Whether it be an emotional solo or a bubbly group number, each represented the dedication and vocal technique of the singers. The harmonies in the trio between Carolyn Pierce (‘20), Amelia Nelson (‘22), and Katelyn Hackett (‘22) were performed with such maturity and accuracy that the set resembled the original songs. Recognition must be given to the pit musicians as well for creating a beautiful musical atmosphere throughout the show.

In addition to the exceptional performance of the actors, the play was brought to life with a meticulously constructed set. The buildings and props were used very creatively in scenes to convey emotions. When Carolyn Pierce and Maddie Dunlap (‘21) shared their mother-daughter scene with the song “Slipping Through My Fingers,” the sweet and melancholic moment was emphasized with a wedding dress and veil. The entire production team did an amazing job bringing the show together and making it entertaining for the audience.

Overall, the CHS Theatre Guild’s production of Mamma Mia! was a great success. The preparation and hard work from everyone in Theatre Guild resulted in an amazing show. From the plot to the music to the set, the musical made everyone feel like a true “Dancing Queen.”