A New Podcast Spotlights Teachers’ Lives Outside of School 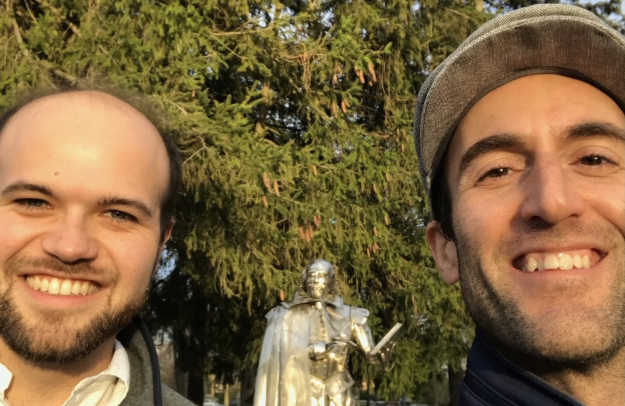 The first episode of the talk show Teacher People has been released by Mr. John Zainea after his AP Language and Composition students suggested the idea to him.

In each episode of Teacher People, Zainea hosts a teacher and spotlights his or her life through a series of different questions about the teacher’s life and experiences. The first episode starts off by explaining that Teacher People is “the podcast that helps you know your teachers as people.”

“This is really exciting,” Zainea says in the first episode. “This is the first time that we’re trying this. The goal this year is to do one episode per month that features a different teacher each month and gives [students] an opportunity to learn a little bit more about them as a person and who they are outside of the classroom.”

The show is structured around the five activities that Zainea uses as daily warm-ups in his class: Monday Music, Tuesday Trailer, Wednesday World, Throwback Thursday and Friday Question.

The idea to create this podcast actually came out of a Friday Question. On Fridays, Zainea asks his class a question, and in return, the class gets to ask him a question back. One class asked him what he would do for a living if he weren’t a teacher. The class then helped him brainstorm, and one student mentioned he had a “radio voice,” and that he should host a talk show. From there, Zainea took some of the ideas his students had and created his very own podcast.

“We have a lot of interesting people in this school,” Zainea said. “I think students are generally interested in their teachers and I thought this would be a way to bring them to light.”

The first episode spotlights English teacher Mr. Adam Schilt. To find out more about Schilt’s life, go to the Podbean website and listen in to episode “1.1” of Teacher People.

“Hopefully this sheds some light on who I am as a person,” Schilt says at the end of the podcast. “I do have a life after 2:52 pm. It’s maybe not as interesting as some other people, but [teachers] are people, too. Hopefully students know we care about them as people and individuals as well.”