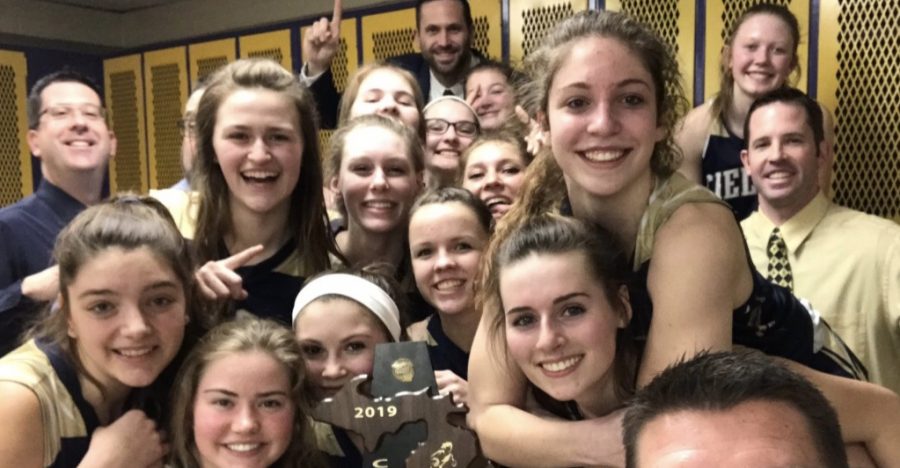 The Bulldogs defeated Carleton Airport High School by 12 points last Wednesday night, with a score of 48-36, placing the team as one of the top eight in the state.

Every year the team has a motto, or saying, that it works for and uses as a reason to get better. This year the motto was, “Make history.” The idea was derived from the fact that the girls basketball team had never won a Regional Championship prior to this year. Before the season started, Senior Captains Briana Hay, Helena Schultz, and Maddie Vasquez met with Head Coach Todd Blomquist to discuss how they could reach these goals and make school history.

“Our main goals were to beat Marshall, win Districts and Regionals, beat the point record, and, obviously, we wanted to win as many games as possible,” Hay said. “Since Coach Bloomquist [and the girls’ basketball program] has never won a Regional Title, that was our biggest goal for the whole year.”

This year is a unique year for the Girls Varsity Basketball Program, because 9 out of 13 players are seniors, and 10 out of the 13 players have had at least one year of varsity experience prior to this year.

Hay explained that the experience and talent of this year’s team has brought the players together and set them apart from other teams. She also said that these traits contributed to their first Regional Championship, as well as the stakes being higher than usual because of the goals the team set.

“For us the biggest thing is depth and experience,” Hay said. “We have nine seniors, which is more than any team we’ve played. Several of us have played on Varsity since we were sophomores and been in many intense, high-pressure games. This allowed us to know how to handle the game, and, knowing that this is our last opportunity, we have more to play for. Also, unlike many of our opponents, we aren’t dependent on one or two people. We have 13 people who can play, and throughout the year we have had nine different girls be the leading scorer. It just shows we are a team, not just a couple players.”

After halftime, Chelsea came out strong and took a 14-point lead with a score of 39-25. This means the team scored 17 points in the third quarter and held Airport to scoring 5. At one point in the fourth quarter, Airport cut the 14-point lead in half. However, the Bulldogs kept ahead and won the game by 12 points, with a score of 48-36.

Though the run in the third quarter gave the team a good size lead early in the second half, Hay explained that it wasn’t until the last minute of the game when she realized what they had achieved.

“[I knew how the game would end] when I was on the bench [fouled out], and Coach Blomquist subbed in the people who hadn’t played yet, and the starters were all out of the game,” Hay said.  “We all looked at each other and were like… we did it. It was a really great feeling.”

This year’s Chelsea team has already made program history by winning 19 consecutive games and winning its first Regional Championship. The team has been appreciating all the support it has been receiving on its track to making history as it strides towards the State Championship. The team is excited to take on Haslet at Fowlerville this Tuesday at 7 o’clock for the chance to advance to the semi-final and play at Van Noord Arena at Calvin College and would greatly appreciate student support there.

“We are all so excited [to keep playing] and so thankful for the support we’ve had,” Hay said.