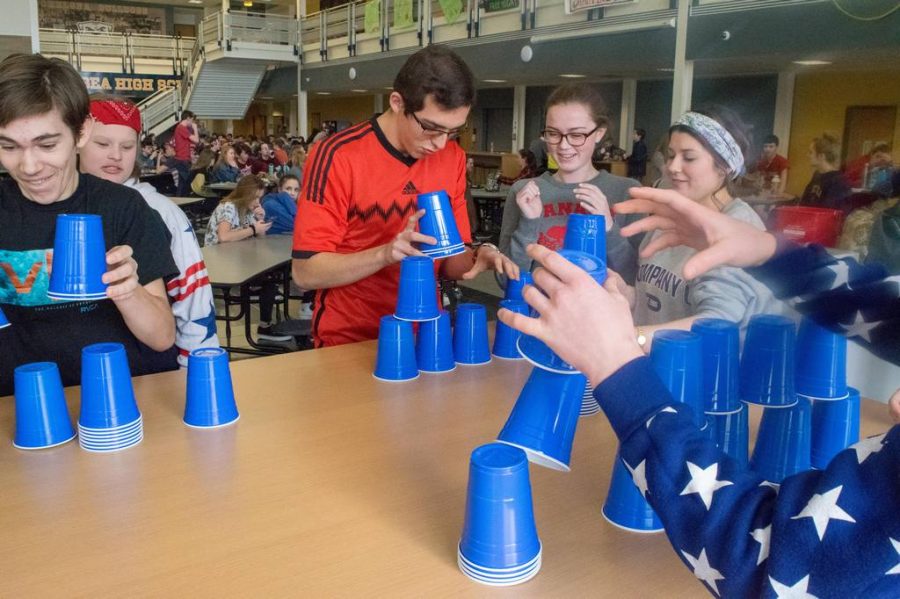 Photo courtesy of the CHS Yearbook.

When students walked into Chelsea High School on Monday, February 5th, they were greeted by a mass of Winter Carnival excitement. The halls were decorated to match each sport and color assigned to the different classes, and the student body looked like they had woken up an hour late. It was Pajama Day, and the first day of our spirit week, which was the basis for a competition between the grades to determine which one of them held the most school/class spirit. The theme this year was the Olympics, with the 2018 Winter Olympics commencing at the end of that week. The categories for each grade were as follows:

The freshmen started out strong in the competition with their hallway decorations, scoring 100 points for the grade because of the work put in by council members Riley Thorburn, Riley Scritchfield, Peggy Smith and Rachel Bareis. However, they didn’t stay in the lead for long, because the lunch time trivia game won the seniors 125 points. The seniors won again with their Pajama Day enthusiasm, ending the day at the top with 275 points, a large 125 points above the second place sophomores.

As the week progressed, the gap between the winners and losers increases rapidly. By Tuesday, the seniors had gained another 100 points for the second spirit day. The grades had to dress up as their team color and sport, and the seniors did really well. After the lunch time games, which had been a scavenger hunt that had students from each grade scouring for a list of random items throughout the lunchroom, the day ended with the freshmen earning zero points, the sophomores earning an extra 100,  and the juniors and seniors both receiving 185.

The winning grade was already incredibly clear by Wednesday, when the seniors won 110 points from lunch time games, and then another hundred in a match of Extreme Volleyball.  Despite valiant efforts put in by multiple freshmen, sophomores, and juniors to dress up like their teachers, the theme of the third spirit day, the seniors still came in first place based on percentage of kids dressed up. Mr. Schilt’s Honors Intro to High School English class all wore every bit of blue they could find in their wardrobe to show their appreciation for their University of Kentucky-loving teacher, but it was still not enough. The seniors ended with 770 points, an incredible 580 points above the last-place freshmen, and 350 points above second-place sophomores.

The points continued predictably as the upperclassmen gained more and more of the upper hand. By Thursday, the points had settled at 875 for the seniors, 620 for the sophomores, 520 for the juniors and 290 for the freshmen.

But, luckily, there was still the pep rally scheduled for Friday, which Student Council had spent a lot of time on. The grades would be up against each other, face to face, fighting for points to get the excitement for Winter Carnival really going. While it was unlikely that there was going to be a grade that beat the seniors, at least there was hope, right? And then the dance would be the very next day!

Unfortunately, Chelsea School District called off school on Friday, February 9th. All the hype that the school had been leading up to for the whole week, and all of the hard work that Student Council had been doing for the pep rally, came crashing down. And then, even worse, the dance itself was canceled, too. It was deemed unsafe because of the roads and the snow, after the cafeteria had been decorated and organized by teachers and Student Council members. Mr. Schilt, one of the teachers that helps run Student Council and also had helped set up for the dance, stated that the cancellation was “obviously. . . a huge disappointment” after all of the hard work put into the events by everyone who had “even [come] in Saturday morning to decorate for the dance.” He also made it clear, however, that it was a very good decision on the school district’s part, because students’ safety must be put first. Maddie Dunlap, a member of student council, had similar sentiments.

“After weeks of hard work, it can be very tough to hear that the work was somewhat for nothing,” she said. “However, I do appreciate and respect the decision. . . no amount of work [Student Council] could’ve done would have been more important than the safety of the students and teachers that were planning on attending.”

The Winter Carnival dance has since been rescheduled to March 10th, and the pep rally will occur sometime in April. The Winter Carnival Princes and King will be announced the week of the dance, and the spirit will still continue. Student Council will make sure of it, by putting just as much hard work into this go around!